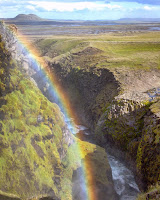 Today is my youngest daughter’s 5th birthday! When I told her that I needed to do some writing this morning she said, “you should write about rainbows!” So that’s what this post is all about (for the record, the writing that I had planned to do this morning was about some cool resources for Geography Awareness Week coming up in November).

How to Make a Rainbow is a SciShow Kids video that I featured when it was released about six years ago. The video gives directions for a little activity in which kids can make rainbows appear on white paper by properly positioning a glass of water in front of ray of sunlight. The video then goes on to explain what makes rainbows appear outside.

How Rainbows Form and What Shape They Really Are is a short video from ABC Australia. The video explains how rainbows are made, but also explains why we only see part of rainbow and not the full circle of a rainbow. (By the way, I’m not related to the presenter any more than I’m related to lead singer of Talking Heads).
Tags: Rainbows Write

Decentralized tech will propel the inclusive economics of Web3